Once upon a time there was an elephant named Ricky. Ricky had asthma and couldn’t go through the tall grass without sneezing and his throat seizing up. His mom got him an atomizer with a special elephant mask, and it helped, but he got bored missing out at the atomizer while the other elephants romped in the air pollution and irritants.

He decided to move to the city, where he could be an indoor elephant and breath only air that was conditioned, filtered, and purified. He called ahead and got himself an office job via phone interview.

When he got there for his first day, he was dismayed to find that the elevator wasn’t designed to capacitate his size.

Okay, he thought, I just have to take the stairs.

But when he opened the stairwell door, it was too narrow. He couldn’t even fit through it, and just looking up that skinny stairwell gave him claustrophobia.

Ricky decided to go outside the building and see if there were any alternatives. He saw a window washer’s lift. It was the best option he’d had yet.

Climbing in, Ricky felt a wave of vertigo, but he pushed it away with sheer willpower. He wanted this job. He found the remote and pushed the button. Up he went.

As he ascended, the engine started to make a strangled noise. Ricky looked at the sign and saw the weight capacity was thousands of pounds below his own weight. This made him dizzier than before, but he was nearly there, so he kept on.

When he got to the eighteenth floor, he found, to his horror, that the window was smooth glass,  unpunctuated by latch or hook. The vertigo was setting in strong. He couldn’t take it. He swayed into the glass and shattered the pane, tumbling into the room with a frightened trumpet.

“GAH! An elephant just broke in!” Someone yelled.

People screamed and scattered in all directions.

Ricky opened his mouth to explain that this was an accident, he was here for an interview but the building lacked sufficient accommodations, but his stress levels were too high from the vertigo and the social ostracism. He had an anxiety attack and an asthma attack, all at once, and all he could do was make wretched zombie noises. This only served to heighten the atmosphere for the humans.

A man in puffed sleeves had a harpoon hanging over his cubicle. The office man who wanted to be a sailor, at last his time had come. He pulled the harpoon from its fastenings, aimed, and launched it at the elephant.

The impact drove it into Ricky’s shoulder, where it didn’t do much damage, but stung quite a bit.

Ricky had had enough. The interview was not worth this. He took the stairs down. The less said about that the better; it was a whole new kind of nightmare, especially the corners.

Work sucks, Ricky thought. I’m moving back into mom’s savanna. At least there, I only have ONE thing wrong with me.

So he did, and lived happily ever after for the perspective. 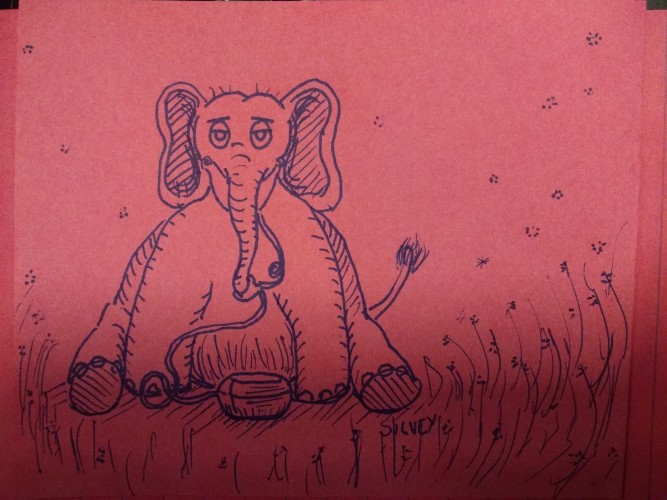 Search: What the fresh hell

Archives: Not So Fresh

My name is Sarah. I live in Missouri. I like to write and draw. I like lots of other stuff too. I'm just posting the things that fall out of my head. Hopefully it's as much fun for you as it is for me! Criticisms welcome.